The thing I have been most dreading is jointing and joining the soundboard planks together. I was lucky enough to get ahold of a number of extra-wide, old Italian spruce soundboard planks from a friend. It only required 3 pieces to create a soundboard large enough to fit this harpsichord. There is even enough after trimming to make an ‘ukulele top!

The ‘planks’ were trimmed and thinned a couple of years ago and left acclimating in my shop on a flat piece of 3/4″ plywood being used as a table. After watching a video on YouTube about jointing boards on a router table, I gave the process a try and it performed a marvelous job of something that I have been dreading. Jointing has always been overly challenging for me and so finding a new method to perform this most critical operation has been a real godsend. It is funny how some operations practically leave you paralyzed! I used to own a Delta tabletop jointer and hated it so much that I finally sold it.

Next comes the trimming to rough size and fitting the soundboard to the case. This is a time-consuming process, but not particularly difficult as it turns out. Like many things in woodworking, at least for me, there is apprehension in getting started, making the first cut, but once you do, it goes on reasonably smoothly. Jointing, Joining, and Trimming and fitting took about 9.5 hours total.

Preparing to trim the soundboard 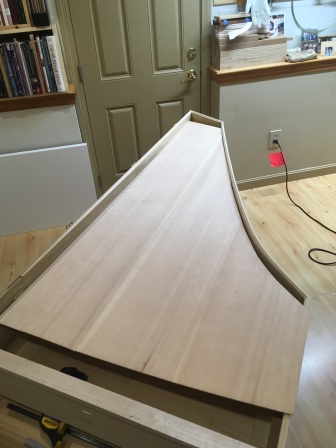 Next comes the final fitting, literally millimeters at a time, very slowly. You have to insert the soundboard (dozens of times), see where it binds up or hits the bentside and mark it with a pencil to trim very slowly until you gradually sneak it up to the tail (see below). The trimming almost all takes place on the bentside of the soundboard and a bit along the tail (the very end of the instrument).

The tools that make this process easier are Lie-Nielsen planes (the No. 101 Violin Plane and the No. 100-1/2 Convex Sole Block Plane). Well-made tools are a real pleasure to work with.

Soundboard out of case for trimming

Small Lie-Nielsen Planes do the trick

Tight fit in the tail

The final step in the process is to trim the front edge of the soundboard flush with the upper belly rail. After having a near-disaster with the jigsaw earlier I decided to simply use a good crosscut saw. Often a hand tool or hand process is much better than a machine, which took me quite a few years to learn! 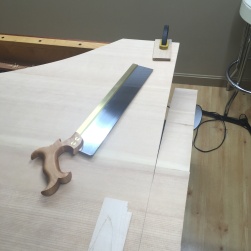 Now with the soundboard fit to the case, the next steps are to make and install the bridges, cutoff and sound bars, as well as the nuts for the wrestplank!

2 Responses to Soundboard joined and fitted